The province of Modena is home to a wealth of valuable treasures that are a joy to discover without haste, surprising visitors with a magic tapestry of art, gastronomy and cars!

This place has been attracting tourists for a long time with its beauty, architectural monuments and gastronomic variety. The province of Modena has been featured in many articles and is even now one of the top topics order custom term paper in writing services.

The ancient heart of the capital of the Dukedom of Este, Modena is a city of art that embraces architectural jewels admired throughout the world. The Cathedral, together with the Ghirlandina belltower and Piazza Grande, was declared a UNESCO World Heritage Site in 1997, a masterpiece of Italian Romanesque style. The seventeenth-century Palazzo Ducale, today home to the Military Academy, used to house the Court of the House of Este, which moved from Ferrara to Modena in 1598. The Estense Gallery and Library, where the most valuable works of art are preserved.

Modena is synonymous with good food all over the world. A fame that dates back to ancient times due to its genuineness, respect for tradition and preservation of traditional flavours. The traditional and innovative menus in restaurants here will delight any palate. Visits can be made to farms throughout the province that produce Parmigiano – Reggiano DOP cheese, Lambrusco di Modena DOP, Aceto Balsamico Tradizionale di Modena DOP and IGP vinegars, Prosciutto di Modena DOP and other local foodstuffs. 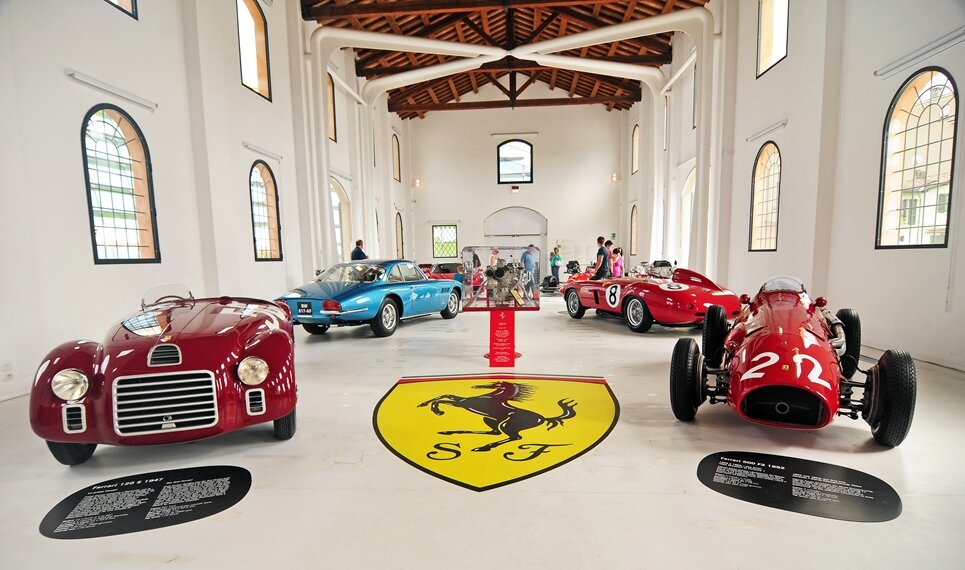 Modena, birthplace of Enzo Ferrari, is a land of cars. Here in the heart of “motorvalley” mechanics are a passion with a long tradition and the myth of speed is an integral part of the culture. Racing and luxury cars are now part of a legend, having become collectors’ pieces and ambassadors for the name of Modena around the world. In addition to the new Enzo Ferrari Museum in Modena and the Ferrari Museum in Maranello, in a radius of just a few kilometres there are several car-related factories, museums and private collections: the Stanguellini Museum, the Umberto Panini museum of vintage cars and motorbikes, the Righini collection, Pagani Automobili, the new Autodromo di Modena racetrack and, in nearby Bologna, Ducati and Lamborghini.

The whole of the province, with its beautiful towns and cities offers a wide range of tourism opportunities: Carpi, the jewel of the Renaissance, Nonantola with its Benedictine Abbey, Maranello and Ferrari, Sassuolo with the Palazzo Ducale and the nearby Terme di Salvarola spa centre, also popular for its treatments using wine, Spilamberto and the Museum of Balsamic Vinegar, Campogalliano with the original Museum of Scales and Balances, the enchanting village of Castelvetro and Levizzano castle, Vignola with the Rocca dei Contrari fortress and local cherries, Mirandola, Finale Emilia, San Felice sul Panaro and the circuit of the Este family fortresses, Montale with its Archaeological Park and Open-air Museum in Terramara and the nearby Modena Golf & Country Club.

On the modenese Apennines, Sestola and Fanano are top for winter sports, Pavullo, Zocca and the many villages, together with their unique surroundings, offer a chance to enjoy sport, excursions and visits to historical towns and castles.

Visitors come here from all over the world, attracted by a long list of events: the Festivalfilosofia, Vie Scena Contemporanea Festival, Grandezze e Meraviglie – the Este festival of music, dance and drama in the theatres of Modena and, in particular, the opera season in the Modena municipal theatre, named after the great maestro Luciano Pavarotti, the Motor Gallery and the Modena 100 Ore Classic car competition appeal to all car fans.